The Buildings on the Blackford Hill Site 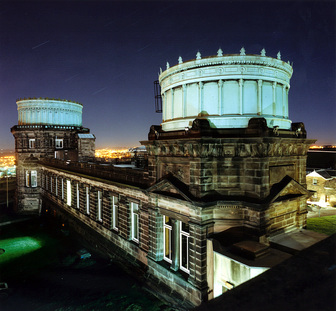 The Royal Observatory Edinburgh at night.
The Royal Observatory Edinburgh (ROE) occupies a compact site on Blackford Hill, a public park and nature reserve on the southern edge of Edinburgh. It has occupied this site continuously since moving from its previous location on Calton Hill in central Edinburgh in the final decade of the nineteenth century. The main buildings date from this time and are of considerable historical and architectural interest. They are Category A listed buildings, a status denoting 'buildings of national or international importance, either architectural or historic, or fine little-altered examples of some particular period, style or building type.'

When the move from Calton Hill was being planned a number of new locations were considered. The Blackford Hill site was chosen for a number of reasons, including: the prevailing wind direction is from the south, thus blowing smoke from the city away from the Observatory; the underlying bedrock is stable, providing suitably firm foundations for the piers to hold the Observatory's telescopes (Blackford Hill is the plug of an extinct volcano) and the location was considered to be unlikely to be encroached on by future house-building (as has largely proved the case). Finally, the Hill is reasonably close to Edinburgh University, an advantage which was reinforced when the University built its new science campus on Kings Buildings, at the foot of Blackford Hill, circa 1910.

Building on the site can be divided into three phases: the original construction in the 1890s, which is the most architecturally significant; expansion during 1960-80 and finally construction of the new Crawford Building in the first two decades of the twenty-first century. All expansion has been within the boundary wall of the original site, though there is now also a car park immediately outside the main gate. 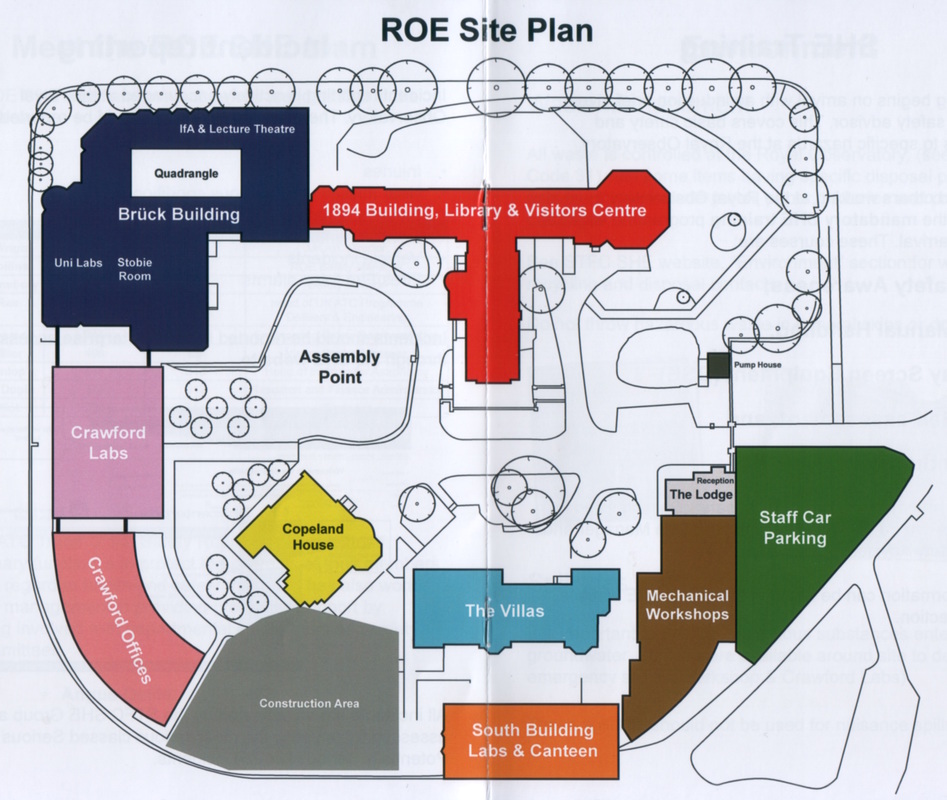 Plan of the Royal Observatory Site showing the various phases of construction: original buildings (1894 Building, Copeland House (the Director's residence), the Villas and the Lodge); extension during the 1960s-80s (Brück Building, South Building and Mechanical Workshops) and more recent construction (the Crawford Labs and Offices). 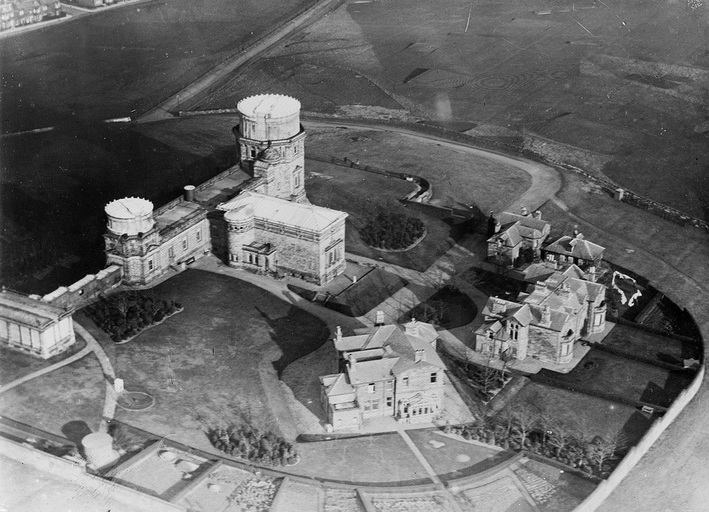 The first aerial view of the site, taken in 1919 and showing the original buildings. 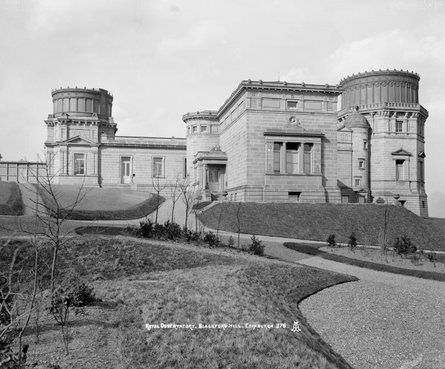 An early view of the 1894 Building, seen from the south.
The original buildings comprise the main '1894 Building' and several dwelling houses for staff, all of which have now been converted to offices or laboratories. Following selection of the site plans for the new buildings were prepared under the supervision of Mr W.W. Robertson, Chief Architect to HM Office of Works in Scotland, and informed by inquiries about observatories recently completed overseas. The estimated cost was £30,000, a very considerable sum for the time, despite which it was approved by the Treasury. Construction was undertaken by the local firm of Messrs W. and J. Kirkwood. Work started in 1892 and was complete by 1895. A formal opening ceremony was held on 7 April 1896, with Lord Balfour of Burleigh, the Secretary of State for Scotland, officiating.

The main building is some 180 feet long and aligned east-west, with octagonal towers at each end. Each tower is topped by a cylindrical 'drum dome' to house and protect the telescope within. The domes are not symmetrical: the larger one is 38 feet in diameter and the smaller 22 feet. Copper cladding gives them their distinctive green appearance. 'Drum domes' were chosen rather than the hemispherical domes more common in anglophone countries because they were judged better able to withstand the Scottish weather. They were built by Sir Howard Grubb of Dublin, the well-known telescope manufacturer. The two towers are connected by a flat roof spanning the entire length of the main building which was intended for making astronomical observations using portable instruments as part of undergraduate classes. It is still used for this purpose, albeit now as part of public observing sessions organised by the Visitor Centre. A spur projects southward from approximately half way along the main building and houses the Observatory's spacious and elegant Library.

The main building is faced with red sandstone from Doddington Hill in Northumberland. The architecture is Italianate in style with extensive exterior decoration that is rich in astronomical references (and which are briefly described below).

The 1894 Building as it appears now.
In addition to the main building the original plan included four dwelling houses: the spacious Director's House, two semi-detached houses for members of staff (always known as 'the villas') and, immediately inside the main gate, a Lodge for the Observatory's engineer. These houses are all typical examples of the stone-built, late Victorian villas that are common in south Edinburgh and elsewhere. All have now been converted to offices or laboratories, though they are category B listed buildings and their exteriors are largely unaltered.

The exterior of the main building is extensively decorated and much of this decoration has astronomical connotations. The long north wall contains eleven tall windows alternating with panels bearing the twelve signs of the zodiac. The pediment of a similar window on the north side of the smaller, western tower is surmounted by a carving of the Sun god Phoebus in his chariot. The pediment of the corresponding window on the south side of the tower is topped by a sundial placed between the figures of Dawn and Dusk and bearing the legend Docet Umbra (the shadow teaches; a common inscription on sundials).

The Library wing is particularly extensively decorated. Prominently positioned above the window on the south-facing wall is a medallion of Lord Crawford (the Observatory's benefactor largely responsible for it relocating from Calton Hill) and the date '1894'. The Scottish coat of arms is inscribed above the main door with the inscription Coeli enarrant gloriam Dei (the heavens declare the glory of God, Psalms 19:1). Around the cornice of the entire wing the names of various famous astronomers are inscribed: Copernicus, Galileo, Kepler, Newton, Herschel, Bessel and Henderson (the last being the first Astronomer Royal for Scotland). These inscriptions perhaps recall the statues of famous scholars, including several astronomers and mathematicians, that decorate the facade of the Palais Universitaire of the University of Strasbourg. It is also reminiscent of the device often used in the frontispieces of Renaissance and Early-Modern treatises, including famously Kepler's Rudolphine Tables of 1627.

Finally, a celestial sphere surmounts the small (non-astronomical) dome that tops the spiral staircase to the East Tower. In addition to these features the entire building is extensively decorated with flowers, gargoyles, stars and other devices.

Subsequent Additions to the Site 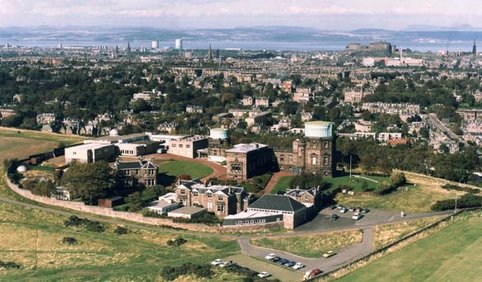 The site as it appeared from the air during the 1970s.
After the initial construction there was little additional permanent building until a burst of activity in the 1960s, with intermittent work continuing during the 1970s and 80s. Starting in 1963 a new workshop and University offices were built extending west from the main building and then turning south to remain within the boundary wall. This complex includes a modern 20 inch (approx 0.5 m) telescope, housed in a hemispherical dome, for undergraduate teaching.

In the 1970s and 80s there was building on the south side of the site, with an extension to the Lodge to provide a new workshop and the South Building immediately inside the boundary wall containing laboratories and a canteen. The modern construction has little intrinsic architectural interest, though the work on the southern side of the site, at least, was designed to blend with the existing buildings.

During the first decade of the twenty-first century the Crawford Building was erected on the western side of the site, extending to the south west corner, to accommodate the newly-established Astronomy Technology Centre (ATC). In addition to offices it includes a large hall for assembly and testing of new astronomical instruments; like the telescopes to which they are attached astronomical instruments have become bigger, and consequently larger facilities are needed to construct them. The Crawford building is currently being extended to completely fill the south west corner of the site and the space behind the Director's house. This building will allow the ATC and University to host the new Higgs Centre for Innovation. 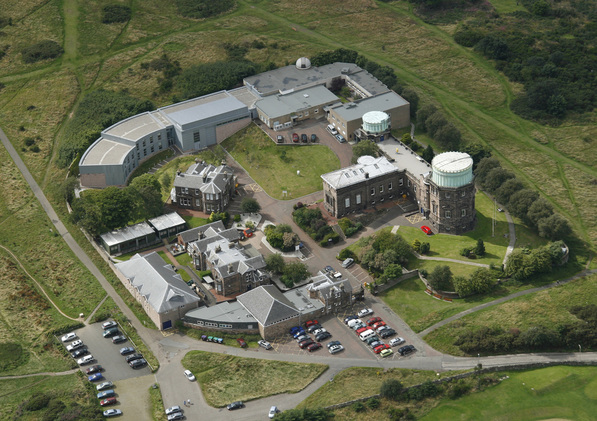 A modern aerial view of the site, after construction of the Crawford Building.

The construction and architecture of the original buildings is briefly described in H.A. Brück, 1983, The Story of Astronomy in Edinburgh (Edinburgh University Press), pp53-57.